Camping Unlimited is a non-profit charitable organization that provides out-of-home respite to parents and caregivers of children and adults with developmental disabilities. Our single-day and overnight programs provide relief from the daily demands of care and supervision, while fostering independence, nurturing responsibility, developing competence and building lifelong friendships. We provide a warm and supportive atmosphere of planned permissiveness that encourages community, recreation, education, fun and adventure.

For our Families, we – 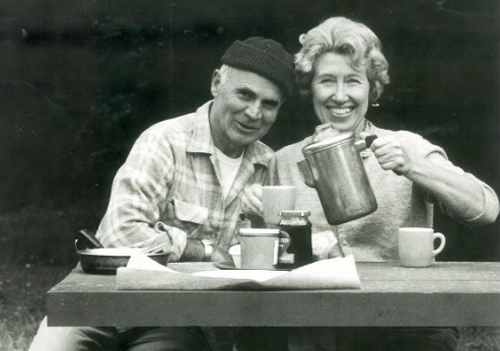 Camping Unlimited is a 501(c)(3) charity, established in 1957 by Alexander Angel Krem in 1957. Since then, we have provided recreation, adventure, fun and friendship to an estimated 14,000 children and adults with special needs for an estimated 150,000 days and nights. In 2015, we served more than 1,100 campers with intellectual or developmental disabilities for more than 6,000 camper days (and nights).

Alex emigrated from Bulgaria in 1928 and graduated in recreation and group work from George Williams College in Chicago, named after the founder of the YMCA. He lived the motto of the YMCA College: “We are born not for ourselves, but for the whole world” and he inspired countless others to follow the same path. He understood that recreation truly means re-creation, a time of clarity and self-knowledge to reflect on what is important in our lives, who we want to be and how we wish to re-create our lives. After a career that included Pacific Coast Director of the United Seamen’s Service and Recreation Director of Edgewood Orphanage in San Francisco and the LA Times Boys Club in Los Angeles, during which he took his own two sons camping in all seasons and weather (including snow camping for days in 10 feet of Sierra snow), Alex became a special education teacher for the developmentally disabled in San Leandro. There, he found his students bound to rigid schedules and required to eat and take recess at different times than their neurotypical schoolmates. He became a pioneer in integration and accomplished ground breaking success in main-streaming his exceptional children into the regular public school program. At that same time, he also discovered that none of his children had been camping, and the story of Camp Krem began. His first camp-outs were on school grounds or in the Krem’s backyard, with wife, Elsie, and sons, Alex Jr. and Tom, being the first camp counselors. Alex noticed how these little forays gave his students opportunities to develop a sense of competency and freedom that enhanced their independence, self-confidence and perception of their self-worth. He also realized how easily such opportunities could be developed within the context of the outdoor experience.

He began his program in the Sierra Nevada Mountains but found the distance too far from our home-base in the San Francisco Bay Area and the altitude too high for comfort. By the time campers became acclimatized to the 5,000 foot elevation it was time to go home. When he was able to rent Camp Linblad in Boulder Creek from the Boy Scouts for two summers, Alex realized that this was a perfect location: Beautiful, undisturbed nature, year around creeks, redwood groves, deep pine forests and fern groves, sun-soaked chaparral, and numerous parks and recreational facilities — all close to the Bay Area and the beautiful beaches of Santa Cruz and the Pacific.

Soon, with the help of parents, teachers and friends of the developmentally disabled, Alex founded Camping Unlimited. In 1961 it became a tax- exempt corporation and in 1962, forty-five acres were purchased in the Santa Cruz Mountains, near Boulder Creek, for a new camp facility. Volunteers, mostly hard-working high school students who shared Alex’s vision and energy and parents who saw Camp Krem as a safe haven for their vulnerable children, built the many buildings and improvements we have. The wonderful women of HARTS in San Leandro helped with donations of all kinds. The US Army Corps of Engineers built a permanent bridge that allowed us access to the property and a fine road from the main highway to the sunny “top of the hill”. The Army also donated kitchen equipment from Fort Ord, including our WWII vintage Wolf range and aluminum cookware stamped “1942” which we still use with gratitude.

In the beginning, the camp was simply a few platforms with tents on them. Since then, with the help of volunteers and donations, Camp Krem has evolved into a complex of buildings including the Jon Luchesse Center, a multipurpose building with large dining room, commercial kitchen, offices, restrooms, and storage; the Richard Bohn Arts and Crafts Building; a health center, directors’ cottage, 12 cabins, a large wheelchair- accessible swimming pool, paved road, miles of hiking trails, an archery range and more.

30 years ago, Alex sold a valuable property in Berkeley that had housed our executive office (the “Bridge”) to fund the purchase of an adjacent 47 acres to allow for expansion and to prevent logging or future development by others.

Since 1957, we have endeavored to carry out Alex’s enlightened philosophy and continue to provide fulfilling camping and recreational activities to campers of all ages, through our Year-Round and Summer programs. Alex believed in providing a warm, friendly atmosphere of planned permissiveness, where the growth of each individual was at his or her own pace and was of the utmost importance.

At Camp Krem, we nurture independence and self-confidence, encourage responsibility, develop a sense of worth and respect for others, and build lifelong relationships in a warm, safe and friendly atmosphere. We strive to open new worlds of discovery, adventure, friendship and learning. Our wonderful program also provides much needed respite to their parents and families, often the only break that many of them get in the year.

Alex is followed by his son, Sandy (Alex Junior), who now acts as Executive Director and his granddaughter, Christina Krem DiGirolamo, who is Camp Director. Thanks to Alex’s clear vision, we are “a place for exceptional people to be themselves”.

Camping Unlimited was established in 1957 and is a 501(c)3 non-profit organization which provides fulfilling camping, recreational, educational and respite services to children and adults with developmental disabilities around the year.

At Camp Krem, we nurture independence and self-confidence, encourage responsibility, develop a sense of worth and respect for others, and build lifelong relationships through a warm and friendly atmosphere of planned permissiveness.